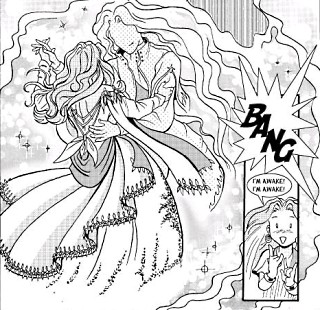 These end at the stroke of the alarm clock.
Advertisement:

A character has a lot on his or her mind. They lie down, and all of a sudden, there's music. And guys in tights. What the...

Then they wake up, and the ballet was All Just a Dream.

The Dream Ballet had its heyday in musical theatre from the 1930s through 1950s, when it was a favorite of such choreographers as George Balanchine, Agnes de Mille, Jerome Robbins and Bob Fosse. It appeared in other media as well, but has now fallen out of fashion. It doesn't necessarily have to be a dream, but it only takes place in a character's mind.

The middle of "A Moment Forever Ago" has Young Bitsy and Young Hank dancing together in Central Park.

The middle of "A Moment Forever Ago" has Young Bitsy and Young Hank dancing together in Central Park.