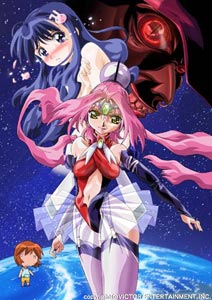 Actually, It's nowhere near as serious as this looks. Note the Super-Deformed Poemi in the bottom-left corner.
"The Heavens call, the Earth calls, the Fans call!
And heads will roll if this video doesn't sell!
By accepting the power of magic,
Puni Puni Poemi makes her big debut!"
Advertisement:

A Spiritual Successor/Non-Linear Sequel OVA to Excel Saga made by the same production team. It manages to cram even more off-the-wall surreality and self-reference than its predecessor into just two episodes, thus creating a black hole that absorbs all reason around it.

Poemi Watanabe is the adopted child of Nabeshin (the Author Avatar of director Watanabe Shinichi) and Kumikumi, a mountain girl who married Nabeshin at the end of Excel Saga. Poemi has simple ambitions in life; she wants the attention of her cool classmate K, and she wants to be a voice actress. Unfortunately, K doesn't even acknowledge her existence (given Poemi's Motor Mouth and Genki Girl personality, that's saying something) and she has trouble staying in character, as she constantly refers to herself as "Kobayashi" (the name of her real-life voice actress) and calls Nabeshin "Director".

One day, a mysterious alien with creepy dangling inappropriate parts fatally attacks Poemi's adoptive parents. After taking advantage of this fine opportunity for dramatic voice acting, Poemi moves in with classmate Futaba Aasu, who has a not-at-all-secret crush on her, and her six sisters, the hereditary Defenders of the Earth. With great responsibility does not come great power, however, since the sisters possess talents like the ability to land safely from any fall and summoning a whirlwind of flower petals. Therefore, when an alien robot begins rampaging around the city it falls to Poemi to save the day by using a magical dead fish to transform into Puni Puni Poemi! With her newfound powers, Poemi tries to balance her dreams against the burden of being Earth's representative.

One thinks that the Earth's standards for its representative could use some reviewing.

For a large part, the show is a merciless parody of Magical Girl anime, possibly up to and including the nonsensical plot (or lack thereof). Along the way, however, it also makes fun of the concept of Fanservice and takes care to self-reference as much as possible. All this is tied together by nonstop gags. Those not put off in the first few minutes will enjoy it tremendously and will take in happily all other Gag Series.