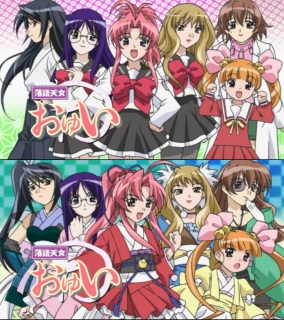 Rakugo Tennyo Oyui is an Anime First series that aired in the winter of 2006.

Yui Tsukishima is an Ordinary High-School Student who aspires to be a Rakugoka. Rakugo is a Japanese comedic storytelling art, relying only on the voice and a fan. She attends school with the shy Tae Yanaka, swordswoman Ryo Sengoku and her chief rival, Miyabi Asukayama. After pestering Master Utamaru, a professional rakugoka, enough to be taken on as his apprentice, she finds that she and her fellow classmates, along with child prodigy Suzu Koishikawa and inventor Akira Naitou, are about to be taken to the past.

The Tennyo (celestial maidens), protectors of Edo, have been defeated. Unable to fight off a recent invasion of demons, the jewels within them travel to the present and bring in their reincarnations - Yui and her friends. They now must adapt to a new time period, discover the powers within themselves, and save the city from the invading army.