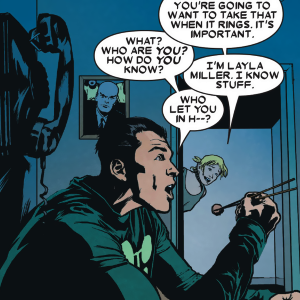 She's Layla Miller. She knows stuff. I wouldn't argue with that.
Advertisement:

Usually female, small and fey in a disturbing way, the Oracular Urchin knows more about the future—or the present—than she really should. Sometimes her mysterious comments are clear, but usually they just confuse matters until everything's over, and maybe not even then. When things come to a head, the Oracular Urchin may be the one who explains Everything (either explicitly or by implication) to the hero — and, to the audience.

Related to the Waif Prophet, but the Oracular Urchin is not usually ill or weak in any way — just ... different, strangely informed and, usually, very oddly plugged-in. Once you have enough background to parse what they say.

See also Fainting Seer, Mad Oracle, and Mysterious Waif. If no one believes her, she's The Cassandra.