Theatre / Anyone Can Whistle 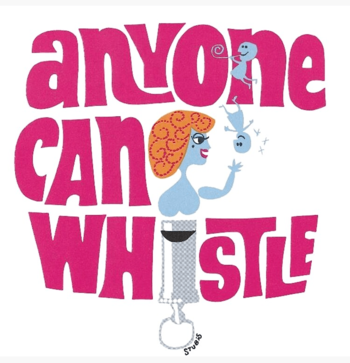 Anyone Can Whistle is a three-act 1964 musical with a book by Arthur Laurents and music and lyrics by Stephen Sondheim. It was the second show to feature Sondheim writing his own music as well as lyrics.

It tells the story of a destitute town, run by the corrupt mayor Cora Hoover Hooper (the musical stage debut of Angela Lansbury), who has a 0% Approval Rating aside from three other officials. They need a way to earn revenue, so they figure it out - a fake miracle, of water gushing from a rock. It draws in tourists and pilgrims and is a smashing success until nurse Fay Apple, who works at the local insane asylum, wants the "miracle water" for the patients. Soon, the loonies start mingling with the pilgrims, and they can't sort out who is who.

Enter one J. Bowden Hapgood, who does just that... by sorting them into Group A and Group 1.

The musical was a notorious flop, plagued by problems throughout rehearsal (including a cast member dying), and ran only 9 performances, but has been somewhat Vindicated by History, at least as a Cult Classic, thanks in part to the decision of Columbia Records to record an original cast album after the show closed, and to a 1995 all-star benefit recording.