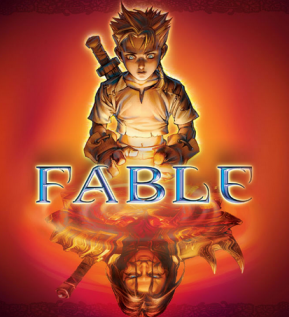 Warning: Objects in pool may be less evil than they appear.
"Deep in the forest of Albion lay the small town of Oakvale, unchanged by time and untouched by the sword. Here lived a boy and his family. A boy dreaming of greatness. Of one day being a Hero."'
— Opening Monologue
Advertisement:

The first game in the Fable series, the initial Fable game focuses on the "Hero of Oakvale."

The game starts off peacefully enough, with the main character looking for ways to obtain a gift for his sister's birthday. But once he has, bandits attack his home village of Oakvale and all things go to hell. The youngster hides from the bandits, but his family are not so fortunate. His father is killed, his mother missing and his sister abducted. A member of the Hero's Guild, Maze, stumbles upon the boy and saves him from certain death. Telling him that there is nothing left for him in Oakvale, Maze takes the boy to the Guild to be raised as a hero.

The game was later re-released as Fable: The Lost Chapters, which extended the storyline, added new content, and contained an expansive Playable Epilogue ending to better conclude the game (which is considered canon as of Fable II).

Another update was later released in February 2014 for Xbox 360, and on PC via Steam in September 2014. Titled Fable Anniversary, the HD remake has the game's visuals rebuilt entirely, a Fable II/III-inspired control scheme, leaderboards and the update pack The Lost Chapters. The Anniversary trailer can be watched here