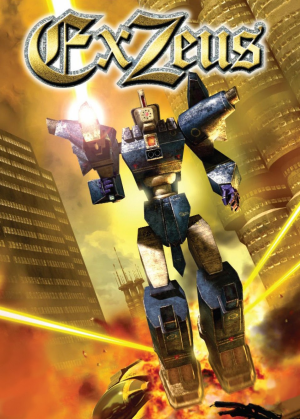 ExZeus is an arcade rail shooter developed by HyperDevbox Japan, formally known as Hyper-Devbox. Despite the company's name, it was founded by Carlo Perconti, one of the founders of the France-based video game company Toka who moved to Japan and set up a game development studio in Tokyo.
Advertisement:

Set in the year 2102 C.E., where a mysterious meteorite enters Earth's orbit which turned out to be an alien war-machine and began attacking the human race. The remaining survivors fled underneath of the Earth's surface with rumors spreading of an alien called "Diadora" being behind the attack. The governing council began a counter-attack operation, code-named "Operation: ExZeus", against the alien invaders and reclaim the planet. To carry out the operation of investigating the alien war-machines' weaknesses and stop Diadora, three experimental robots — Calista, Sophia, and Dynamis — were dispatched for the mission.

Gameplay in ExZeus is as simple as its plot: pick one of the three battle robots, shoot down anything that isn't you with your upgradable spread shot, lock-on missiles, and powerful laser cannon while collecting power-ups. In between levels, however, you're given the opportunity to use the gold picked up from destroying enemies to power-up your robot's stats and replenish supplies.

ExZeus was first released in Japan in 2004 on Tsunami Visual Technologies' Tsunami Motion arcade board and re-released in 2005 on the Sega NAOMI GD-ROM hardware. It was ported for the PlayStation 2 only in Europe, along with a shareware PC port. A Wii version of the game was released overseas by Conspiracy Entertainment in 2007 under the title of Counter Force. An updated version of the game titled ExZeus Arcade was released for iOS in 2009 and Android devices in 2010.

A sequel of the game, ExZeus 2, was released for Android in 2012 and sub-sequentially released on iOS, Windows Phone, and Windows 8 or later via the Microsoft Store. It takes places over a hundred years after the events of the first games, after peace has been restored on Earth only for a new threat to show up to attack the human race once more. Operation: ExZeus was re-launched against the new invaders, this time taking three robots from the previous of battle and combining them to form a new battle robot, Minos. ExZeus 2 plays like its predecessor but adds new gameplay elements where you take the fight on ground such fighting enemies in beat 'em up arenas, commandeer vehicles such as motorcycles and buggies, or fend off attacks from a mounted turret, along with the ability to purchase upgrades to level-up Minos' combat capabilities. In 2017, an updated version of ExZeus 2 was re-released on PC that does not require a Windows 8 or later, and was available on itch.io, Game Jolt, Amazon, and Steam.

On August 4, 2021, Ziggurat Interactive announced a Compilation Rerelease of the two ExZeus titles developed by Sickhead Games for PlayStation 4, Xbox One, Nintendo Switch, and PC (via Steam and GOG.com) as ExZeus: The Complete Collection, and it was released on September 30, 2021.