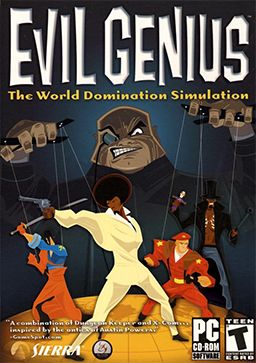 Developed by Elixir Studios in 2004, Evil Genius is a Space-Management Game best described as Dungeon Keeper meets James Bond. You are the eponymous evil genius, and it is your job to construct a villainous lair in an active volcano, recruit henchmen, steal priceless treasures, hold the world for ransom, and fight off pesky super agents. Also, you need to keep your minions well-trained and happy, because the looting and ransoming won't take care of itself.

Notable for a quirky sense of humor mixed with classically over-the-top megalomanical villainy. Everything has a '60s vibe to it, and the forces of justice are just as stereotypical as your own minions.

There's also a great deal of freedom and a wide range of methods you can use to complete your overarching goal. Want to run a fortress island with massive numbers of armed guards, machinegun emplacements, and horrifying freaks of nature, all emphasizing firepower? Perfectly reasonable. Want a deadly secluded island filled with martial arts disciples? Feel free! Want to beguile your enemies with squads of elite deceptive social minions who will leave their heads spinning and questioning their loyalty? That's also perfectly viable. Want to create a resort island as a front for your evil machinations? Go right ahead. Want to set a thousand deadly traps and twisty, mystifying corridors that will leave the forces of justice lost, confused, and very very dead? Nothing's stopping you. You're allowed to either discard the Villain Ball with prejudice or wrap both hands around it and run straight for the end zone.

Upon release, the game was reasonably successful but not enough to save its developer, Elixir Studios, from closing down a year after its launch. The IPs were bought up by Rebellion, who would release two different and now-defunct Facebook titles, Evil Genius WMD and Evil Genius Online. A full sequel, Evil Genius 2: World Domination released on March 30, 2021.