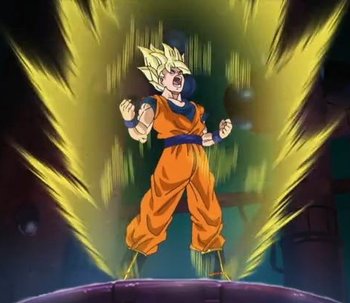 As the power flows through your body and your hair glows and your Battle Aura burns brightly, how are you gonna react physically? Usually doing this classic pose, body arched back, arms at sides at an angle facing outwards, legs at full extension about 20 degrees from each other.

If the power-up is making you float, you may as well point those toes. Hands in fists or curled are optional, as is screaming at the top of the lungs. It is highly recommended to make use of this trope to add that extra layer of badass to any transformation and it's shorter than a full Transformation Sequence too. This trope often serves as a visual indicator of someone entering their Super Mode, or pulling out the stops.

Compare Meditation Power Up which is a more sedate posture that serves the same purpose. If a Dangerous Forbidden Technique is used, expect the pose to look painful in turn.