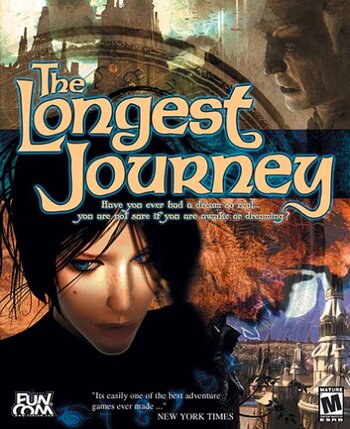 "Mystery is important. To know everything, to know the whole truth, is dull. There is no magic in that. Magic is not knowing, magic is wondering about what and how and where."
— Cortez
Advertisement:

April Ryan is an ordinary art student living in the Orwellian metropolis Newport and applying for the local Academy of Arts. She has her share of problems with her parents, insecurity about her future, and increasingly strange dreams, but she also has some great friends, a job, and a friendly landlady. Then a weird Cool Old Guy named Cortez appears and tells her that she is The Chosen One who has to Save Both Worlds — and then he sends her to that other world, Arcadia, that she is supposed to save. As her familiar world crumbles around her, April has to dive deeper into the secrets of the universe, fulfill cryptic prophecies, bring down an Ancient Conspiracy or two, save the Guardian of the Balance, and ultimately restore the harmony between the Twin Worlds of Stark and Arcadia. And that all in less than two weeks.

The game is available on both Steam and GOG.com, but notoriously difficult to get to run on some modern systems. It is, however, currently fully playable

in the ResidualVM emulation engine

(an offshoot of ScummVM), albeit with some glitches and missing features.