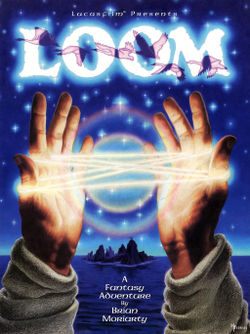 "It was long after the passing of the second shadow, when dragons ruled the twilight sky, and the stars were bright and numerous..."
Advertisement:

Loom is an epic fantasy adventure, released by Lucasfilm Games in 1990, which tells of the Age of the Great Guilds, a time when the peoples of the game's world banded together to form city-states around their chosen profession. One of these guilds, the Guild of Weavers, eventually perfected their craft so that they could weave more than just fabric, and started weaving drafts into the very fabric of reality itself. Shunned by the other guilds as practitioners of witchcraft, the Guild of Weavers isolated themselves from the rest of the world onto an island of their own, naming it after the great Loom they held as the symbol of their guild.

However, eventually the Weavers discover that their numbers are dwindling and their seed is barren (probably due to inbreeding), and Lady Cygna Threadbare decides to take it upon herself to plant a thread of her creation into the Loom and, inadvertently, draws an unforeseen infant out of it, whom she surrenders to an old serving woman's care as she is banished from the village, as well as the mortal world, by being turned into a swan.

The planting of the gray thread has thrown the entire pattern of the Loom into chaos, and the Loom-child, named Bobbin by his caretaker, grows up shunned by the rest of his village. On his seventeenth birthday, as the Guild's rulers are about to reach a consensus on what to do with Bobbin, a swan appears in the village and transforms everyone but Bobbin into a swan. Hetchel tells him that the pattern is about to fall apart and he'll have to join the swans before it's too late. From thereon Bobbin sets out on a voyage into the world outside Loom Island, with grave consequences...

At its time of release, Loom was noted for its ambitious fantasy story, imaginative setting and surprisingly barren user interface: The only item the player could carry was the Distaff, a magical instrument used to shape the world around the player and solve puzzles, which was used by learning and casting short four-note drafts that could be heard around the game world. Most of these drafts were also randomly generated at the start of each game, meaning they would have to be re-learned on each individual playthrough.note The CD version does not randomize the drafts: instead, you are not allowed to use a draft until you've heard it.

Two sequels, Forge and The Fold, wherein the player would take control over two minor characters, whom Bobbin met in the course of Loom's story, were supposed to bring closure to the Story Arc started by Loom, but due to a lack of manpower, work on on them never began. There is a fan-made sequel in the works, available here

with a demo out.

The challenge of the puzzles was mostly in figuring out which drafts to use and how: Some drafts could also be played backwards for the reverse effect. Unusually for an adventure game, the game also boasted three difficulty levels which would change the interface of the Distaff: the highest difficulty level required players to play all the notes by ear.

Give it a look sometime.