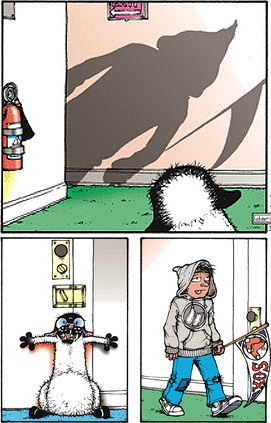 When normal objects are arranged in a manner that resembles a monster.

A character (usually a child) has heard a Ghost Story and is frightened that the monster described in said story will come for them. Later (always at night), during a thunderstorm, that character will see what is undoubtedly the shadow of the monster!... only it turns out to be several normal objects arranged so that it vaguely resembles the monster. How they got that way, we'll never know.

This often pops up in kids' shows, and usually involves tree branches with no leaves (even if it's in a setting where It's Always Spring).