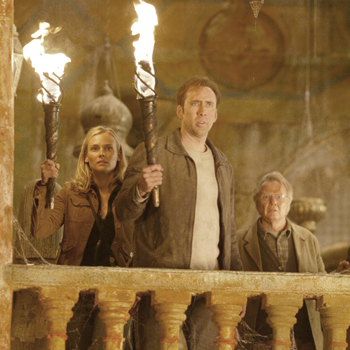 Made in 1776, burning brightly over 200 years later in 2004.
"A guy like you should think about going electric. Seriously."
— Buffy in "Buffy vs. Dracula"
Advertisement:

A Hollywood Torch is a piece of wood about a foot and a half long, the end of which burns brightly. It emits no significant smoke and never burns out. It tends to produce just enough light to fully illuminate a room, no matter the size, unless of course there's something horrible in a corner that we're not meant to see just yet. In some cases they can provide enough light to cast their own shadow, despite this being physically impossible. For the horror movie variant, use the arm or leg ripped off a dried-out skeleton, wrapped with a scrap of cloth (or, worse, cobwebs). Naturally, this is just as bright and long-lasting as any other Hollywood Torch; never mind that dry bone isn't flammable at sub-crematorium temperatures.

Even if they've been abandoned in a dilapidated temple for a thousand years, these burst into cheery flame at the slightest spark, without ever spreading this flame to their surroundings — unless intended to do so. Don't expect them to consume all the oxygen in the air, either, unless the plot demands it. In other words, they're ordinary torches suffused with improbable traits of convenience.

Some elements of this trope have their origins in simple filmmaking limitations: the audience (and the film crew) have to be able to see some of what is going on or else things are just going to be messy. If there's no plausible reason for someone to have a flashlight, or if firelight makes for better ambiance, this is practically your only other recourse.

This trope is nearly omnipresent in film and television, such that lampshades are still rare (and who puts a lampshade on a torch anyway?). However, it may or may not be present in any particular video game, depending on whether the torches serve as part of a puzzle or other challenge. If averted, expect them to burn far quicker than their Real Life counterparts.

Peasants are uncannily skilled at acquiring them in massive numbers on short notice.

Transatlantic translation note: If a British/Commonwealth person says 'torch' they might mean the flaming kind or they might mean what an American or Canadian would call a 'flashlight' (if clarification is ever needed, the latter is an electric torch).