Recap / My Little Pony: Friendship Is Magic S8 E22 "What Lies Beneath" 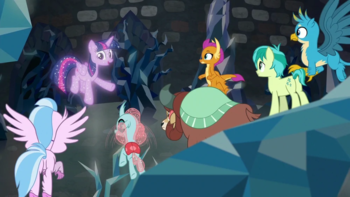 Twilight is teaching the students about the history of the Tree of Harmony and how it has come up in Equestria's past. The non-pony students, not accustomed to pony history, struggle with the history, and even become worried when Twilight announces a test the next day. Outside, the group still are confused about how the Tree works, and Gallus makes a snide remark near one of the trees on the school, asking it to teach them, unaware of a soft light in a grate nearby.

Sandbar offers to help the group study, and they head off to the school's library. There, while they study, they find Cozy Glow working on sorting books in the library. As they talk about their fears about the test, she goads the non-pony students about being at a disadvantage at learning friendship and having used up Sandbar's time. Sandbar tells the others he's been more than happy to help but the group is left with some resentment.

As they continue to study, they hear a noise deeper in the library, and find branches pushing up through a grate. They enter the grate, finding themselves under the school where a vast network of roots and branches has filled the space. They suddenly are greeted by an illusion of Twilight. Hearing that they don't think they can pass their friendship test, the figure says they will each have their own test which they must complete by the next morning. Otherwise the branches will close up the grate for good. The six black out, and then they each suddenly wake up alone, facing their worst fears: Gallus finds himself in a tight space that grows tighter when he breaks any of the rays of light that pass through it; Silverstream sees shadows of the Storm King and his minions; Ocellus finds changelings in their old form and soon discovers she appears as Queen Chrysalis, unable to change back to herself; Yona finds herself in a vast spiders' nest triggering her fear of spiders; Smolder finds two high-class ponies who try to invite her to a tea party, preying on the fact that Smolder deep down does like cute things but doesn't want to admit it; and Sandbar finds Rainbow Dash and Rarity who want his help on a friendship mission but giving him no time to find his friends, putting his loyalty to the test.

Gallus and Smolder are able to free themselves first, and after regrouping, find that the grate is closing up quickly. Instead of leaving, they go back to help the others, with Gallus helping to show Silverstream the shadows are only from rock formations, and Smolder helping Ocellus realize that she is really a good changeling at heart. They meet up again, as Yona has learned to befriend the spiders, and with their help, locate Sandbar, who had realized that Rainbow Dash and Rarity were purposely leading him away from his friends. Back at the grate, the entrance has nearly closed off, when the illusion of Twilight appears again. The students realize this is not Twilight after all but the Tree of Harmony talking to them, having put them to the test. The Tree, through the illusion of Twilight, informs the group they have all proven they have friendship since they put the safety of their friends above their own. As the illusion disappears, the branches disperse around the grate, allowing them to leave.

Back in the library, they find it is the next morning, and Cozy Glow is there. After explaining what happened, they realize they have forgotten about the actual test, but Cozy Glow says that she will tell Twilight they were helping her sort books all night, and get an extension for them. They thank Cozy as they collapse into sleep from their adventure. Cozy Glow looks over the ground, and then to the grate, telling them she will take care of everything as she looks at the tree's glow...