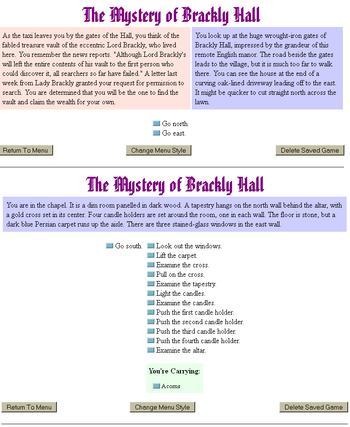 The opening, and one of the puzzles.
The Mystery of Brackly Hall is a 2000 Interactive Fiction game by C. Patrick, hosted online

at Adventure Games Live. Lord Brackly is dead, and he has left his inheritance to whoever can find the secret vault hidden somewhere on his estate; it is the player's objective to find the vault.
Advertisement:

Although not an especially remarkable game — it is the easiest game hosted on Adventure Games Live — it is notable as the first user-submitted game, which inspired other AGL players to begin working on their own games.