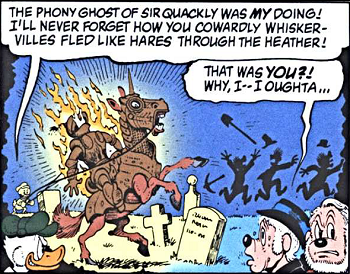 When the heroes cannot directly challenge the villain or his mooks, they disguise themselves as monsters or build something that's basically a tank with a threatening exterior. Usually relies on intimidation more than any actual weapons. When villains resort to this tactic, it's a "Scooby-Doo" Hoax.

A suptrope of Sham Supernatural. Compare and contrast Monster Façade, which is a similarly terrifying act put on by a Gentle Giant or a Reluctant Monster, who would have the strength to actually harm their opponent but prefers not to. See also Weapon for Intimidation. Compare El Cid Ploy, where the nonexistent threat is the heroes' dead or absent leader.