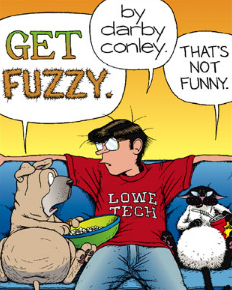 Get Fuzzy is a newspaper comic written and drawn by Darby Conley, that chronicles the day to day (mis)adventures of a Siamese cat named Bucky, a Labrador-Shar Pei cross named Satchel and their owner/roommate, Rob Wilco.

The three live in an apartment in Boston, where Satchel has his own room, while Bucky takes a towel closet (he has not only complained about it, but seceded from the United States). Many of the jokes revolve around the mean-natured Bucky taking advantage of Satchel's naïveté, driving Rob crazy, and incredibly lame puns.

Starting in 2011, the strip slowly transitioned from a daily strip into a Sunday-only strip, although no official statement was ever made about this. As of 2013, the weekday strips consist only of reruns. According to Stephan Pastis, Conley has been taking several breaks from the strip due to "personal reasons".

Get Fuzzy provides examples of: