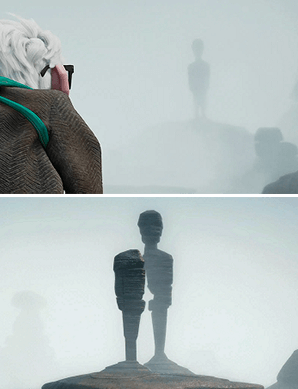 "You were talking to a rock."
A Visual Gag where a silhouette, outline, or shadow looks like something important, but upon closer inspection, it is something completely unrelated.
Advertisement:

The reveal usually comes in one of two ways: Either a light is shined on the silhouette to show it in more detail, and/or the actual object is shown nearby.

Compare with Scary Shadow Fakeout, which shows a character mistaking the vague silhouette of something ordinary for a threat. This is a Comedy Trope where the silhouette is extremely specific to the point where it seems like there's nothing else it could possibly be, only to reveal an improbable arrangement of objects that replicates its outline exactly.

Um, Arlo? That's not your dad. But hey, at least he got to cheer you up.

Um, Arlo? That's not your dad. But hey, at least he got to cheer you up.