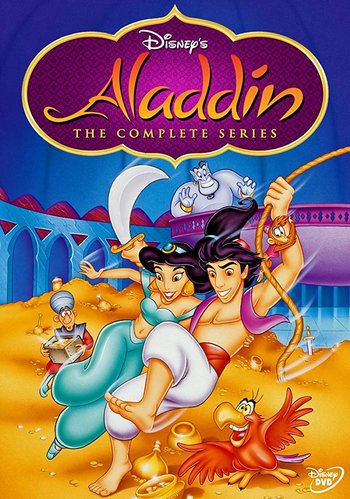 Follow me to a place where incredible feats are routine every hour or so
Where enchantment runs rampant, gets wild in the streets
Open sesame, here we go!
—Theme Song
Advertisement:

The sequel and spin-off television series to Disney's Aladdin, which aired from February 6, 1994 to November 25, 1995 (the original film's third anniversary, coincidentally). Before the series' official airing, nine episodes were previewed on The Disney Channel, even before the release of the first sequel. The series then started airing on The Disney Afternoon and CBS and reran on Disney Channel until it was replaced by their preteen lineup. The series later reran on Toon Disney until the channel was shut down in 2009.

Set after The Return of Jafar, the series shows the many adventures of Aladdin and the gang in and outside of Agrabah, as they meet new enemies and friends, and encounter mysteries and treasures found all over the world they could never dream of. Many of the stories are based on tales from the 1,001 Nights.

Aladdin and the King of Thieves served as a full-length finale to both the TV series and Aladdin's story as a whole.

Tropes used in the animated series: