Trapped on the Astral Plane 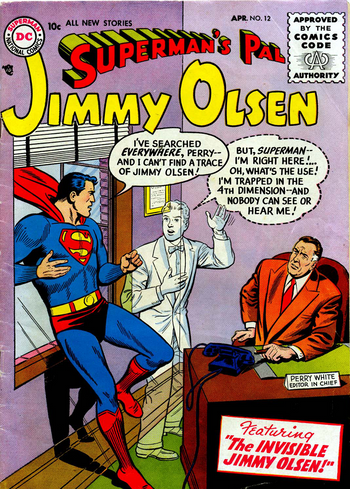 A character has somehow been transferred to another plane of existence. Not ascended to a higher one, mind you. This is just an invisible world sitting "on top" of the one we live in. Beings trapped in it can observe our world and move around in it, but are unable to interact with anything or anyone. Their friends will not be able to see or hear them, and they will pass straight through any solid objects they come across.

Some variations involve the character leaving their body behind in the physical world, but others have them disappear from this world entirely. Generally speaking, this trope should only include living characters, since we have other tropes for ghosts and spirits.

Other residents of the astral plane may include magical creatures, spirits, ghosts, Energy Beings, or even just a whole crew of other humans who were trapped in it over the years. Science fiction variations are also possible, but are less likely to be already inhabited when a character enters one.

Subtrope of Layered World. May overlap with Phantom Zone, Spirit World and Astral Projection (often combined with Power Incontinence or An Astral Projection, Not a Ghost). If the trapped character finds someone who can see the astral plane, expect them to ask "You Can See Me?"