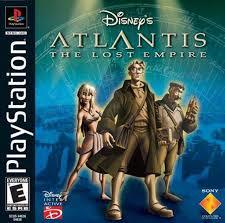 Just before Atlantis: The Lost Empire came out on theaters, a game for the PlayStation, Gameboy Advance and Gameboy Color based on the film was released. The game details Milo's journey to Atlantis, featuring Milo, Vinny, Audrey, Mole and Kida as playable characters.