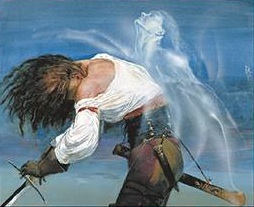 Don't worry, having a soul is overrated.
"I need you to let me touch it. The human soul — it's pure... energy. If I can siphon some of that off, I might be able to bring Sam and Dean back."
— Castiel the angel (to Bobby), Supernatural, "Frontierland"
Advertisement:

A subtrope of Elemental Powers. This is the power over spirits, or spiritual energy. People using this power are likely to be able to manipulate this energy, which may or may not equate to magic, depending on the setting. Expect them to be able to speak to the spirits of the dead, as well as have some authority or control over them. Possession and Mind Control may also be within their powers.

This can be either a villainous or heroic power, depending on how it's portrayed and used. (If portrayed negatively, this may overlap with power over darkness) If it is used by a villain, be very careful — it's likely they have some very nasty powers, like being able to remove people's souls from their bodies or draining their life force. This may or may not instantly kill them. People using this power are also likely to be quiet, creepy, and stoic. Can be Element No. 5.

Unlike some of the other Elemental Powers, this power is more closely associated with subtlety, subterfuge and deceit rather than blasting stuff, though there are exceptions, such as spirit blasts and Faux Flame. Oh, and be careful if you try to kill these people — it's very likely that they'll come back as ghosts, possibly even stronger than they were in life. At extremes they may become a Psychopomp with complete control over the forces of life and death. Keep a can handy to cram them into, and look out for external containers they might use to sustain their life or powers.

Super-Trope to Soul-Powered Engine. Compare Your Soul Is Mine!, which involves actually acquiring or stealing souls (and its subtrope Soul Eating), and Psychic Powers. It may be the justification for why The Devil wants to make deals to claim a human soul for his own. Depending on the setting, this may or may not overlap with Ki Manipulation and Life Energy. Some of the ways to use this power overlap with Power of the Void, though conceptually they're not that similar. Contrast Necromancy, which is a power over death and manipulation of The Undead, although both can overlap. See also Our Souls Are Different.

Not to be confused with the concert documentary Soul Power. Also has nothing to do with Tom Morello's guitar.