Ride / Earthquake: The Big One 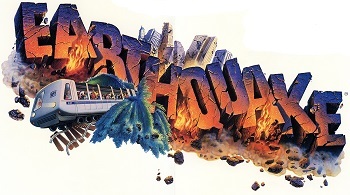 "Ladies and gentlemen, we just experienced a slight tremor. There is no danger, please remain calm-"
Advertisement:

Earthquake: The Big One was a special effects simulation attraction that existed at Universal Studios Florida from its opening day until 2007.

Based on the disaster film, Earthquake, the attraction featured three pre-shows that explained how the special effects in the film were accomplished; such as a miniature model being used to show Los Angeles' destruction, blue screen effects for the backgrounds, and numerous other practical effects. Along with this, the pre-shows also featured a narration by Charlton Heston, explaining in further detail the special effects work that went into the movie.

The final part of the attraction had guests boarding a San Francisco subway train and experiencing a simulation of an earthquake in the subway tunnels, which included events such as fires, roads collapsing, a near-collision with another subway train, and a huge flood as the finale.

The attraction was slightly altered in 2002, making it focus on several Universal movies instead of just Earthquake. This lasted until the later part of 2007, where the attraction was then closed and converted into the also now-gone Disaster!, a virtually identical attraction that was instead a tongue-in-cheek parody of the disaster B-movie genre; not being based on a particular movie.

Tropes used in Earthquake: The Big One include: