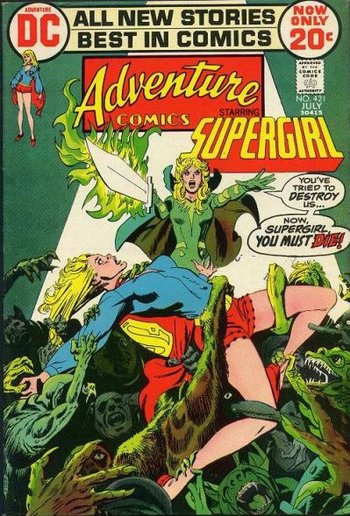 "Look! Look at what you've done! Look at all the decay, all the destruction!"
"Peer into your soul, Supergirl, and see what you have never faced... your own evil!"
— Nightflame
Advertisement:

Linda Danvers/Kara Zor-El's stressful routine of dealing with bullying co-workers and her lousy boss Geoff Anderson at her work as a photographer at San Francisco station KFS-TV gets disrupted when a mysterious Amazon called Nightflame, wielding a sword with terrible energy powers appears in San Francisco through a portal, raises havoc, and demands that Supergirl be brought to her.

After tearing down and burning down a chunk of the city, Nightflame locates the Girl of Steel at KSF-TV. Supergirl tries to fight her, but Nightflame quickly and easily knocks her out, separates her spirit from her body, and flies off.

When Supergirl awakens, she finds herself depowered and trapped in a strange hellish world, beset by demons and Nightflame, who reveals that world is the Innerverse, a psychical micro-cosmos created by Linda's inner darkness. However that world is dying, and Nightflame has a plan to fix that: take over Supergirl's body.

Supergirl: By relating to someone, being close, joined... that is what destroyed that part of me what wanted... me to die! I must find out who it was who saved me from myself — who taught me how to live...