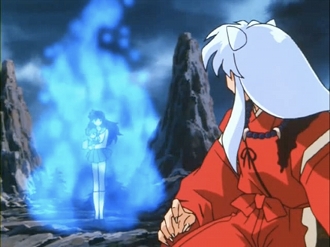 Unlike witches, miko can't be burned at the stake. Especially when they're Friendly Foxfire-Proof.
"My flame is but an illusion, but it will burn you if you believe it to be real."
— Dhalsim, Street Fighter IV
Advertisement:

It looks like fire because that's what the Master of Illusion wants you to see. Despite crackling, it consumes no air, burns no fuel and creates no smoke. If it generates heat or burns victims, it's because it's magical or because Your Mind Makes It Real. Even if it can incinerate a chair, it rarely spreads to the rest of the room. It probably deals less damage than straight-up pyrokinesis, too, though it can likely bypass resistances to fire. And a quick Tap on the Head to the creator likely puts them all out.

Faux Flame can also be produced by holograms or other sufficiently advanced technology: it will look like fire, and sometimes will even produce heat, but in reality it's just an image. Someone who specializes in Playing with Fire will not be impressed.

In combat, the caster can make the Faux Flames Friendly Fire Proof and not worry about harming allies. This property has the added bonus of letting casters wreath themselves in flame to look cool.

Can be related to Cold Flames, although it is equally likely to be hot. Compare and/or contrast Hellfire. Unrelated to Fake Relationship.