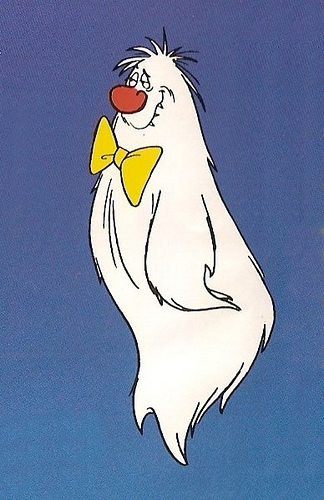 Ghosts are often portrayed as inherently somber beings, doomed to remain near the place of their death and mourn their own demise forever. These ghosts however, will have none of that. Silly Spooks are the clowns of the undead, causing laughter instead of, or sometimes in addition to, fear. In some cases, the characters will be scared of the ghost while the audience laughs. Other times, the Silly Spook will be funny In-Universe and out. But at the end of the day, SOMEONE will have the giggles.

The comedy inherent in this trope can be deliberate on the ghost's part or not. Silly Spooks that don't want to be funny tend to be portrayed as hilariously incompetent at scaring people, which is often their job.

Despite the name, this trope can apply not only to ghosts, but to any stereotypically scary supernatural being.

The Trope Namer is The Haunted Mansion ride at Disney Theme Parks and the assorted media directly based upon it. Compare Friendly Ghost, who is also a non-scary but not necessarily funny spirit, or the Reluctant Monster who isn't even aware of its role. This is one of the polar opposites to Ghastly Ghost. Can be a Ridiculously Alive Undead.