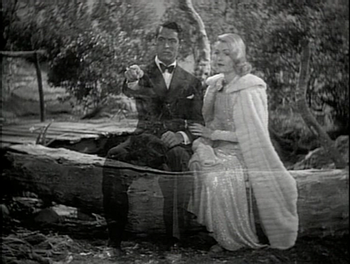 Topper is a 1937 Screwball Comedy starring Cary Grant, Constance Bennett, and Roland Young. Grant and Bennett play George and Marion Kerby, a madcap, hard-partying married couple who seem to take special delight in irritating Cosmo Topper (Young), the director of the bank that George owns a piece of. One day they party a little too hard and George crashes the car, killing both of them. The Kerbys re-materialize as ghosts, and after figuring out that they're dead, they realize that they need to do a good deed to get into heaven. The good deed is livening up the humdrum life and stale marriage of Cosmo Topper. The Kerbys promptly start messing around with Cosmo, causing him much consternation. Wacky hijinks and comic misunderstandings ensue.

Topper was followed by sequels Topper Takes a Trip (with Young and Bennett but not Grant) and Topper Returns (with only Young) as well as a TV show.