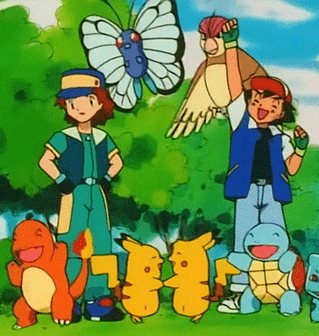 The cast runs into another group that is functionally identical to them. The same number of people, the same roles represented, maybe even the same tastes in clothes or food but expect a Palette Swap. Usually creeps out the original group a lot, although a common humor variant is that no one notices the similarities. Or only notices the similarities to everyone else's parallel but not their own. If the characters find their counterparts' habits annoying, without noticing any similarities, this can lead to Hypocritical Humor. Sometimes it is Self-Parody.

There are examples of a couple meeting another couple who are a timeshifted version of themselves. If younger, they reminisce about the start of their courtship, sometimes fighting about "what happened to us?" If older, they'll fight about how to avoid an unpleasant fate.

Compare The Psycho Rangers, where the other squad are the evil versions. Those baddies are often recruited or created specifically to oppose our heroes, the standard Similar Squad just happens to resemble the main cast. Often related or contributes to Geodesic Cast if the new group sticks around.

Whilst leading his group to the Winchester, Shaun bumps into his friend Yvonne, whose own group of survivors bears a strikingly resemblance to Shaun's.

Whilst leading his group to the Winchester, Shaun bumps into his friend Yvonne, whose own group of survivors bears a strikingly resemblance to Shaun's.