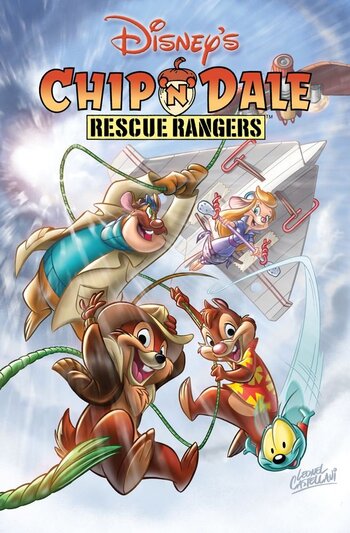 There have been two comic book series based on Chip 'n Dale: Rescue Rangers.
Advertisement:

The first was published by Disney's ill-fated comics division from 1990-1991 and ran for 19 issues, beginning with a two-issue adaptation of the TV version's Five-Episode Pilot.

The second was published by Boom! Kids, beginning in 2010, and ran for a total of eight issues before the contract expired.

The Rescue Rangers are back in action! When the Animal Rescue System — an invention created by Gadget's father Geegaw intended to help animals defend themselves — falls into the hands of felonious feline Fat Cat, it's up to the Rangers to scour the four corners of the Earth for the four parts to the key that can put a stop to the machine's power once and for all!

After returning from their globetrotting adventure, the Rangers try to get back to their normal routine — but a group called the Danger Rangers, seemingly the evil counterparts to the Rangers, wreak havoc in the park during the Rangers' first full day back. A kidnapping in the animal kingdom occurs after this, and although still shaken, the Rangers spring into action — but all is not as it seems! It will take the help of some old friends to stop the malevolent machinations of some new foes — including someone from Gadget's past!

Currently being reprinted, along with Darkwing Duck, in a new "Disney Afternoon Giant" compilation.

Tropes associated with the Disney series include:

Tropes associated with the Boom! series include: