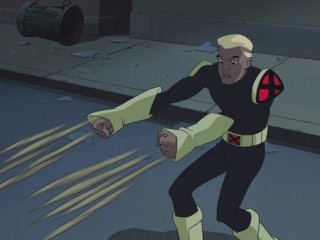 He's got a powerful point to make.
Advertisement:

Spikes of Doom are always painful, especially if mobile. If one were able to use those spikes as weapons, they would be extremely deadly.

This is the Spike Shooter, someone capable of having spikes come out of his body, and sometimes able to fire them. The character also needs to have some Required Secondary Powers, one of them being the spikes not tearing his skin in the process. Or a Healing Factor to fix up the damage, alternately.

An Ice Person or someone who is Dishing Out Dirt can mimic this ability, with icicles or stalagmites.

This includes other small body parts that can be fired at opponents to do damage, such as spines, quills, needles, stingers, thorns and so on. The Cactus Person will often have the ability to launch its thorns in this manner.

If the spikes in question are nails, that's Nail 'Em. Feather Flechettes and Flechette Storm are closely related tropes. Not to be confused with the Pile Bunker, in which the spike is shot out but as a piston instead of a projectile.