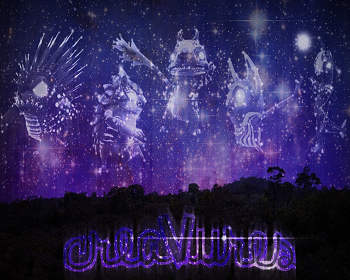 CreaVures is a Puzzle Platformer by Muse Games, where you play as five 'CreaVures' (controlling two in tandem), each with a unique ability that helps them to traverse the environment. The game was released for PC and Mac in 2011, and ported to iOS in 2012. It had a Kickstarter in February 2011, but the game was already essentially finished by then, and they only asked for $3000 (and received $5,334

) to help it launch.

The story is as follows: Much has changed in recent memory. The forest’s swirling light, once plentiful, is now cast so thin you can barely see through the darkness. The symphonic night has gone quiet, save a lone voice: the forest is calling. It needs your help. You know what must be done, how to save your mother forest. Will you? Go gather the others. They are waiting for you. Together you must venture deep into the forest, to bring her back from the brink.

Hurry, before the light is lost!