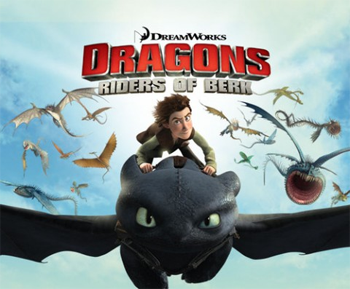 "This is Berk. For generations, it was Viking against Dragon. The battles were ferocious... then one day, everything changed. I met Toothless. And together, we've shown people here that instead of fighting dragons, we can ride them. Live with them, even train them."
Advertisement:

DreamWorks Dragons (first titled Dragons: Riders of Berk, then renamed to Dragons: Defenders of Berk for the second season, and finally titled Dragons: Race to the Edge for the remaining six seasons) is an animated series that picks up where How to Train Your Dragon left off.

For centuries, the inhabitants of Berk were locked in a violent struggle with the dragons, until Hiccup learned how to tame them. Once he managed to finally reconcile their differences, the two species lived Happily Ever After. Ha! Yeah, right. The many problems of having a massive horde of untrained but otherwise friendly dragons quickly becomes apparent, and anti-dragon sentiment begins to stir up once more. Determined not to let the whole cycle start up yet again, Hiccup resolves to teach the dragons to work with the Vikings in everyday life. Despite a rough start, he learns to channel their instincts into productive tasks, so Stoick puts Hiccup in charge of a new dragon academy to encourage this behavior. Of course along with the daily troubles of keeping the dragons in check, outside forces such as a rival viking clan likewise present challenges for the young dragon trainer.

Dragons: Race to the Edge takes place three years after the end of season two, and sees Hiccup, Toothless and the Dragon Riders soar beyond the borders of Berk and discover a mysterious object called the Dragon Eye, an ancient artifact filled with secrets that leads them to new lands filled with never-before-seen dragons. Hot on their trails though are the Dragon Hunters, who will stop at nothing until they seize the powerful Dragon Eye for themselves. The third season premiered on Netflix on June 26, 2015, while the eighth and final season premiered on February 16, 2018. In 2019, Netflix released a new series called Dragons: Rescue Riders. In 2021, Hulu and Peacock released another series, taking place in modern times (1300 years in the future) called Dragons: The Nine Realms.

This series shares a Character Sheet with its parent film.

There is a Recap Page here.

Not to be confused with Dragonriders of Pern.

open/close all folders
Tropes A to F
Tropes G to L
Tropes M to R
Tropes S to Z
"This is Berk. We've got ice, we've got snow, and we've got more ice. But we've also got dragons. We train them, learn from them, protect them... And they protect us; sometimes from ourselves. One thing's for sure: We wouldn't trade this for anything. Would you?"
Feedback

The Midnight Sun is an annual two-week long astronomical event where the sun does not set. The perpetual day time is driving the vikings bonkers to varying degrees from a lack of sleep.

The Midnight Sun is an annual two-week long astronomical event where the sun does not set. The perpetual day time is driving the vikings bonkers to varying degrees from a lack of sleep.