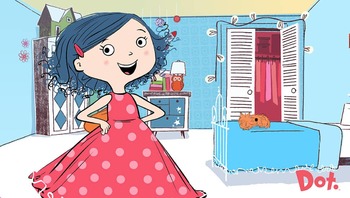 Dot. is a Canadian children's animated television series that started airing on CBC Kids on September 6, 2016. It is based on a children's book of the same name by Randi Zuckerberg (the former director of market development and spokesperson for Facebook, and a sister of the company's co-founder and CEO Mark Zuckerberg).

The series stars the eponymous Dot Comet (voice of Lilly Bartlam), an energetic and tech-savvy eight-year-old girl who loves to explore the world as she solves all sorts of everyday problems with the help of digital technology along with her friends; Hal, Ruby, Nev, and Dev, along with her dog, Scratch.

The show is produced by Industrial Brothers (also known for Top Wing) and The Jim Henson Company (yes, that Jim Henson Company). It also airs on Universal Kids in the United States, starting October 22, 2016. A second season was announced on January 26, 2018, and made its debut on CBC in Canada on October 6, 2018.

Has nothing to do with the Warner Sister.