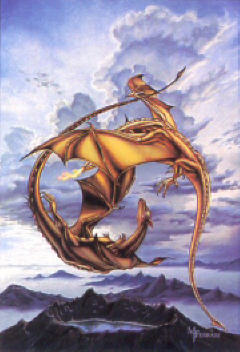 Pern, an isolated world with no useful resources, seemed like the ideal place for people tired of technology to establish a pastoral utopia, until Thread, an alien fungus that could devour a cow in seconds, began to fall from the skies. Rather than permanently resort to technological measures, the colonists used genetic engineering to create dragons, a solution compatible with their principles since, like the spaceships that had brought them to Pern, it was technology they could use once, then discard. Using planes to fight Thread would mean living in an industrial society capable of supporting them; dragons could be supported by the idealised medieval society the settlers had wanted. There's also the matter that they'd been warned the planet's resources were "negligible". There's insufficient metal and fuel for such an industrial society, whether or not they want one.

Written by Anne McCaffrey, the first Pern novella, "Weyr Search", was published in Analog, an adult science fiction magazine edited by John W. Campbell, in October 1967. She kept writing them for another forty years, though later in collaboration with her son, Todd, who eventually took over the series. She was the first woman writer in history to win the Hugo and Nebula Awards, for "Weyr Search" and the original "Dragonflight" (Analog, December 1967/January 1968).

Most of the books take place over two thousand years after Pern was first settled, beginning when Thread has been absent for 400 years, ever since most of the dragonriders mysteriously disappeared. Only a handful of people still believe Thread was ever real, and there aren't enough dragons left to fight it if it should return, which it does. Fortunately, it turns out that dragons aren't just fire-breathing telepathic teleporters; they can also Time Travel. The heroine travels 400 years into the past, and brings forward the missing dragonriders, creating a Stable Time Loop.

Subsequent books dealt with the culture clash between the old-fashioned time-displaced dragon riders and the people they had come to save, and with the gradual rediscovery of technology, which led to the unearthing of the original colony, and a final end to Thread. There are also several prequels, describing how various aspects of Pern society came to be. Some of the books overlap with each other, covering the same events but following different characters.

The series initially had a fantasy feel, with a few Science Fiction trappings,note If John W. Campbell published it in Analog, he at least believed it to be science fiction. He did not publish anything he thought of as fantasy literature, which is why Ray Bradbury and Zenna Henderson never appeared in the magazine. then evolved into Science Fantasy. McCaffrey, for her part, always insisted that the stories were straight Sci-Fi, though it could be hard to tell in many of the books.

There was also a board game from Nova Game Designs

Novels and short stories (in order of publication):