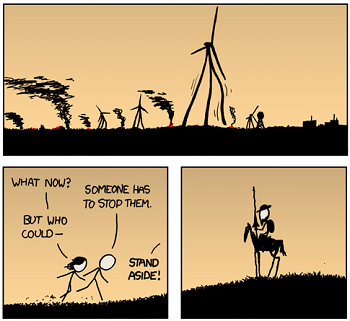 "The moment their arms spun freely in our air, they were doomed -- for Man has earned his right to hold this planet against all comers, by virtue of occasionally producing someone totally batshit insane."
"Ah yes, 'Reapers'. The immortal race of sentient starships allegedly waiting in dark space. Oh, we have dismissed that claim."
— Councilor Sparatus, Mass Effect 2
Advertisement:

A Windmill Political is a threat that doesn't exist, but some people believe it does or pretend that it does. There are lots of windmills, lots of people who (honestly or dishonestly) Cry Wolf. With so much nuttery and dishonesty going on, how is one to accept a real but really strange threat to be real?

Some threats are easy to mistake for windmills, but they turn out to be real threats.

There are four ways that this can come into play:

For something to be No Mere Windmill, it must first be dismissed as a windmill. Thus, the trope is often closely related to Only Sane Man, Ignored Expert, Doomsayer, Cassandra Truth, Subverted Suspicion Aesop, and/or You Have to Believe Me!. Depending on context, it may become a case of either The Cuckoolander Was Right or Strawman Has a Point. It may also become a case of Accidental Truth if someone invents a Windmill Crusade that just happens to resemble a genuine threat.

In many cases, it is also related to The Conspiracy and Devil in Plain Sight.

Contrast Elephant in the Living Room, where people actually do know that the problem is not a windmill, and Weirdness Censor, where "nothing to see here" becomes a Windmill Political in itself. See also Properly Paranoid. Then Let Me Be Evil is where a windmill turns into a giant.

Just as with the supertrope Windmill Political: No contemporary Real Life examples please, and no history examples except ones surrounded by a really thick consensus.

The presence of a work in this list means a hidden threat has become real. Odds are good that Here there be spoilers

Alternative Title(s): Not Merely A Windmill, Mistaken For Crazy