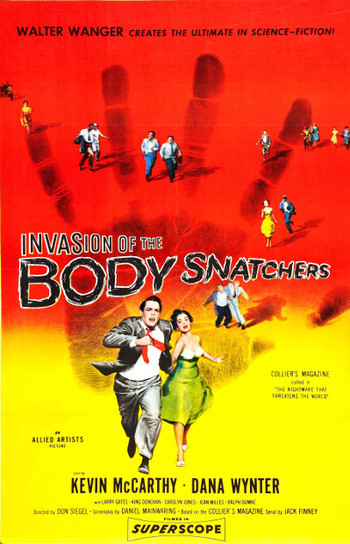 "Look, you fools! You're in danger! Can't you see? They're after you! They're after all of us! Our wives, our children, everyone! They're here already! YOU'RE NEXT!"
Advertisement:

Miles Bennell (Kevin Mc Carthy) is a physician in the small California town of Santa Mira whose patients have begun accusing their family and friends of being impostors. They can't explain their suspicions—there are no physical or behavioral changes—but they are still convinced that their loved ones are somehow no longer themselves. Bennell and his colleague, Dan Kaufman (Larry Gates), initially chalk this up as mass hysteria, a diagnosis which appears to be confirmed when the patients start recanting their accusations.

However, Bennell soon discovers that the patients were right. The people of Santa Mira are in fact being replaced by alien doppelgangers, identical duplicates grown in pods, which replace them while they sleep. Behind their perfect mimicry of humanity is a soulless, inert void. The "pod people" have no culture of their own—only what they have copied from humanity—and no goal other than survival. Can Bennell, Gates, and Bennell's recently-returned ex-girlfriend Becky Driscoll (Dana Wynter) warn the authorities and stop the takeover from spreading?

Usually interpreted as a Cold War-era metaphor for Communist infiltration, although some see it more as an indictment of McCarthyism and small-town insularity and conformity. Word of God denies any sort of political message at all, however.

The 1956 film provides examples of: