Film / Star in the Night 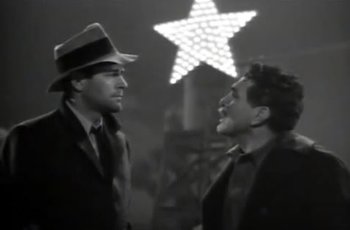 It's Christmas Eve out in the deserts of the southwest. Three cowboys on horseback see a flashing star off in the distance and decide to follow it. The star is the rather blinky sign atop the Star Auto Court, a humble roadside motel. Nick, the proprietor, is a grumpy sort who dislikes Christmas for being hypocritical. The various guests at the inn are no less cranky: a single man berates Nick and his wife for botching his shirts in the laundry, another man complains about not getting an extra blanket, while a woman complains about intoxicated guests in the next cabin loudly singing Christmas carols.

So Nick, who is in no mood for holiday cheer, refuses to give a free cup of coffee to the scraggly hitchhiker who wanders into the auto court, and is even less interested to hear the hitchhiker talk about the essential goodness of humanity and how Christmas brings people together.

Then a young couple, a husband and his heavily pregnant wife, show up at the auto court. But there's no room, all the cabins being rented, so the woman, who seems to be going into labor, has to go lie in the manger. Uh, the barn, that is.

Star in the Night was the first directing credit for Don Siegel, who would go on to an illustrious career that included the original Invasion of the Body Snatchers and several classic Clint Eastwood dramas such as Dirty Harry.