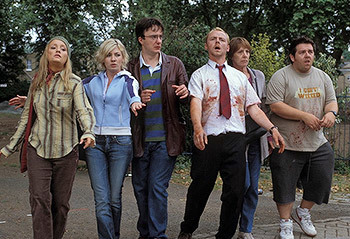 This took a lot of rehearsal.
"Ok, everyone, into sick formation!"
— Sokka, Avatar: The Last Airbender, "Return to Omashu"
Advertisement:

When characters are facing the Zombie Apocalypse and need to get from point A to point B and the only way is through a mob of hungry undead, what is the proper thing to do? Act like a zombie! Shuffle and moan with your arms outstretched, and if you've got access to some cosmetics, give yourself a pasty makeover. After all, there are No Zombie Cannibals so you'll be safe, right? Just hope that the zombies don't see through your disguise by being able to detect your delicious living flesh in other ways!

Typically, this is a sign that a work is closer to the "comedy" end of the Sliding Scale of Comedy and Horror, since most "serious" horror realizes this ploy is about as effective as putting a mustache on a hamburger. More horror-skewed variants do exist, but the method of disguise is usually far more grotesque and gory.

The Trope Namer is the song by L7, which was used in the trailer for Shaun of the Dead, despite the song having nothing to do with zombies. note It's about Apathetic Citizens.

Not to be confused with Faking the Dead. A Sub-Trope of both Dressing as the Enemy and Sham Supernatural. Compare with Pretend to Be Brainwashed in non-zombie-related contexts, such as situations where a group is surrounded by people who have been brainwashed, body snatched or assimilated into a Hive Mind. Compare with Mistaken for Undead, where it is unintentional.

Professor Professor, Yummy Yummy Says My Tummy, Victor, and Anita all pretend to be zombies to get past various U.Z.Z. agents who have actually been turned into zombies.

Alternative Title(s): Pretend That Were Dead

Professor Professor, Yummy Yummy Says My Tummy, Victor, and Anita all pretend to be zombies to get past various U.Z.Z. agents who have actually been turned into zombies.