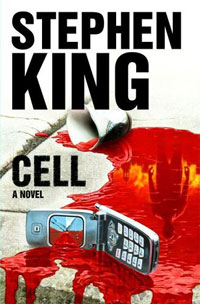 God's in His heaven, the stock market's riding high, and the world goes on uncaring.

That is, until the Pulse strikes.

Any person using a cellphone is instantly devolved into a rabid, mindless creature that kills everyone and everything around them, using whatever means necessary to inflict damage. The "Phoners", as they're called, kill billions within seconds.

When the Pulse hits, struggling artist Clay is in Boston, having just landed a lucrative deal for his graphic novel. Fleeing the burning city with new friends Tom and Alice, he hopes to return home to Maine to find out what became of his estranged wife and their young son. En route, the surviving Phoners begin displaying (even more) alarming changes in behavior...

Cell was written by Stephen King and published in 2006. It was going to be made into a movie, but after wallowing in Development Hell (possibly because of the bomb that was One Missed Call), and almost taking the form of a TV miniseries starring John Cusack and Samuel L. Jackson, both of whom had previously worked together on the adaptation of 1408, it was postponed. A film was finally released in August 2016, with Cusack and Jackson still playing lead roles.