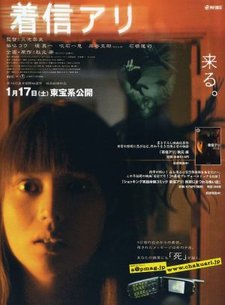 One Missed Call (着信アリ) is a Japanese horror franchise that began with the Yasushi Akimoto novel Chakushin Ari, written simultaneously with a film version which was Takashi Miike's romp into commercial horror. The story centers on Yumi, a college student whose friends begin to receive mysterious voicemails, announced by a creepy children's song. The only one who believes her friend's deaths aren't suicides (at first) is a young policeman named Yamashita, whose sister also received the Call of Death.
Advertisement:

It was later followed by two sequels - One Missed Call 2 and One Missed Call: Final - and an American remake. A ten-episode TV Spinoff series was made in 2005. Manga adaptations and a pachinko video game were also produced.

Tropes used by the films: