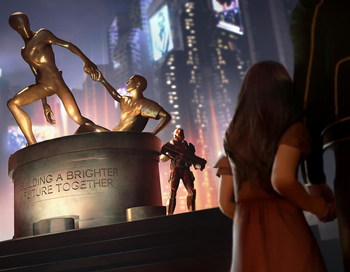 One has to wonder: is the human being helped to his feet... or being left behind?
"It has come to my attention that some have lately called me a collaborator, as if such a term was shameful. [...] I say, yes, I am a collaborator. We must all collaborate, willingly, eagerly, if we expect to reap the benefits of unification. And reap, we shall!"
— Dr. Wallace Breen, Half-Life 2
Advertisement:

Somewhere between the friendly aliens and the aliens who want to wipe us out completely, there's a group whose intentions are definitely hostile, but not (immediately) genocidal. They land on Earth, knock down our pathetic defenses, and decide things would be better if they ran our lives for us. Maybe they need slaves, maybe they think we don't know how to govern ourselves, maybe they're setting the stage for a far more worrisome and sometimes tasty (tasty for them, that is) plan.

Whatever the reason, Terra Firma has become a client of some extraterrestrial power: a Vichy Planet administered by local collaborators. Best case scenario, the aliens are just doing it for our own good and intend to make sure the new government works out for us. Worst case scenario, we all go into the meatgrinder.

The name is inspired by the French State (established after the fall of France's Third Republic) during World War II. During the Battle of France,

with Paris occupied, the French National Assembly voted extraordinary power to Marshall Philippe Pétain, the hero of Verdun, who agreed to armistices with Nazi Germany and Fascist Italy and became chief of the newly formed 'French State' which succeeded the Third Republic. Initially northern France was occupied by Germany, some parts along the Alps (and later Corsica as well) were occupied by Italy, and southern France remained under direct French control, an area known as 'la Zone libre', "the Free Zone". Pétain made the spa town of Vichy the seat of government and de facto capital and presided over a two-year (1940-42) era of close co-operation with and aid to Germany until Germany assumed direct control over the 'Zone libre' so it could fortify southern France against an allied invasion. Though it called itself the French State, the allies dubbed it "Vichy France" or "The Vichy Régime" and the very name 'Vichy' became something of a byword for pragmatic, if somewhat shamefaced, collaboration with the enemy. French military and political elements that wished to continue the fight against the Axis and resist its new French client took the form of La Résistance, "Free France/Fighting France".

This trope provides a sharp contrast to any series where humanity freely cruises the stars and calls many of the shots, and will generally focus on how humanity is affected by the change in power and how people feel about and react to it.

Often, in the more worse case scenario, Earth would become a totalitarian Dystopia emulating occupied Europe during World War II, where humans are being enslaved or/before being killed; expect La Résistance and (less often) the aliens being actually allegories for Nazis especially if this condition is depicted. Les Collaborateurs will sometimes help them, usually in a bid to get some of their old power back. See also Villain World and Humans Are Not the Dominant Species.