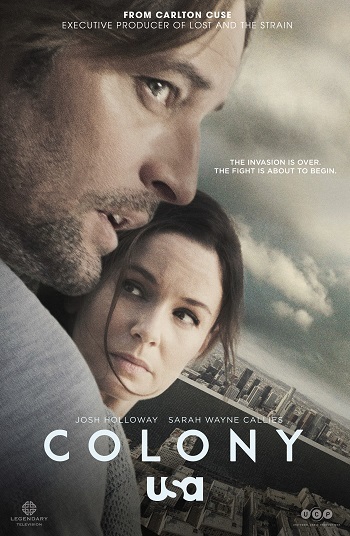 Colony is a 2016 drama/science fiction television series broadcasted by USA Network, created by Carlton Cuse and Ryan J Condal. The show stars Josh Holloway, Sarah Wayne Callies, Peter Jacobson and Amanda Righetti. It had an early bird preview on December 21, 2015 when the pilot episode was aired on the network's official website. Otherwise, the show officially made its premiere on January 14, 2016 with a 10 episode first season. A second season was soon ordered.

The show takes place in a dystopic future where the Earth is under occupation by a hostile alien force known as The Host/s, which they won after they defeated all military forces in under eight hours. in a war that is known as The Arrival. All countries have been placed under occupation, being administered by officials from the Colonial Transitional Authority. They are assisted by The Proxies in helping the CTA govern the cities, now known as Blocs. They're backed by highly militarized law enforcement units known as Homeland Security or Red Hats.

The Bowmans currently live in Los Angeles, one of the many cities under CTA control. Will Bowman is an ex-US Army Ranger and an ex-FBI agent who has to make a living as a mechanic and truck driver to help his family make ends meet. Unknown to most of the public, he is also an anti-occupation fighter living in the city alongside his wife Katie. One day, he covertly travels under cover towards Santa Monica to investigate claims that one of his sons, Charlie, may have been there after being separated during the war. After he was brought into RH/HS custody, LA governor Alan Snyder tells him about an offer that he can't refuse. To back it up, he brings armed RH officers to their residence to prove his point. From there on, the Bowmans are conflicted about whether they should help the CTA or still continue being with the resistance.

The show has ended after the third season, but Paramount is actively looking for cable/streaming video providers willing to air another season.