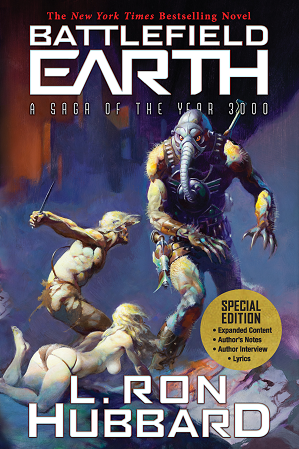 In an even more professorial voice, already deep and roaring enough, Terl repeated his thought. "Man is an endangered species."
Char glowered at him. "What in the name of diseased crap are you reading?"
— Battlefield Earth, Part 1, Chapter 1
Advertisement:

Battlefield Earth: A Saga of the Year 3000 is a 1982 science fiction novel written by L. Ron Hubbard about Jonnie Goodboy Tyler, one of the last humans left on Earth after an Alien Invasion by the sadistic, corporate Psychlos. After growing frustrated with life in his miserable mountain village, Jonnie strikes on his own only to be captured by Terl, a "clever, not intelligent" Psychlo with a scheme to get rich by having human slaves mine gold for him. Jonnie is taught the Psychlos' language and masters the aliens' technology, but when the time comes to capture more workers he convinces them to help overthrow the aliens and liberate the planet. With the aid of this band of warrior Scots, Jonnie leads a daring attack that simultaneously strikes at the Psychlo homeworld even as it crushes the alien occupiers.

That's the first third or so of the book. After that Jonnie has to deal with Psychlo POWs, a bitter political rival allied with Terl and a neo-neo-Nazi, other extraterrestrial forces eager to swoop in on a vulnerable Earth, and alien debt collectors trying to repossess the planet, all while cracking the secrets of Psychlo mathematics.

A film adaptation, covering only the first part of the book, was released in the year 2000, starring devout Scientologist John Travolta (who bankrolled the project) and co-starring Forest Whitaker and Barry Pepper. It's widely considered one of the worst films ever made.

Rifftrax: "Man is an endangered species?" The popularity of this novel indicates that this could well be a self-fulfilling prophecy.