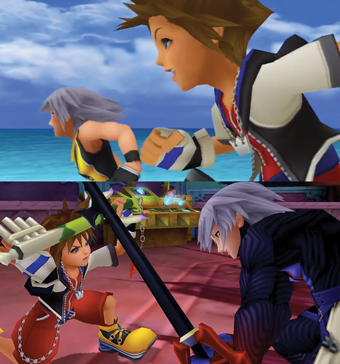 "The Heartless obey me now, Sora! Now I have nothing to fear!"
"I embrace my rival, but only to strangle him."
— Jean Racine
Advertisement:

Two characters are (or were) clearly friends; the innocent lead's friend probably had a dark past or was shunned by others, but nonetheless they managed to become friends.

However, at some point, their playful rivalry starts to escalate (a one-sided affair, usually) or they simply drift apart because of the plot. Often times the powder keg is a single event that breaks the increasingly tenuous friendship, at which point one friend becomes the villain. This can be part of a newly revealed dark past, or dealing with a major problem in a way his friend or other people can't tolerate. Sometimes it's just a very minor misunderstanding no one seems interested in clarifying.

This is a common fate for The Rival and certain types of Lancers, especially if they were the lead character's friend and Missed the Call, or if they grew up with a third, female friend.

If the main character is a Messianic Archetype or even just has a strong connection with his True Companions, expect him to make it his mission to turn his friend back to the side of good even while everyone else is trying to kill him. Whether he succeeds or fails in this mission becomes a source of much drama for the character. Meanwhile, the rival turned villain's job is to dredge up all his pent-up feelings of jealousy to try to justify his actions often becoming his own worst enemy in the process.

If the rival is a sibling, it's Cain and Abel. Contrast Rivals Team Up and Driven by Envy.

Sister trope of The Rival. May or may not be The Resenter. Compare Arch-Enemy. See also Evil Former Friend and Rival Final Boss.