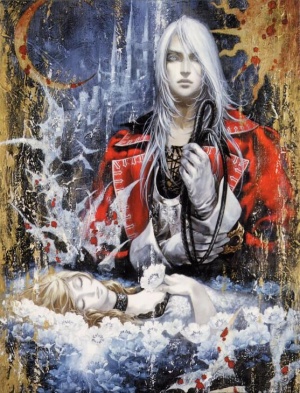 Castlevania: Harmony of Dissonance* known as Castlevania: Concerto of the Midnight Sun in Japan. This was during the brief period where the Japanese market used Castlevania for certain games not starring Dracula is the second Castlevania game for the Game Boy Advance, released in 2002, and the first one on the system to be directed by Koji "IGA" Igarashi.

The year is 1748, and Castlevania has mysteriously re-appeared in the woods of Eastern Europe. Juste Belmont and his friend Maxim Kischine set out to investigate, hoping to find a childhood friend, Lydie Erlanger. Upon entering the Castle, the two friends are separated and Juste begins the search for Lydie and the answers to the castle's reappearance. The plot thickens when Maxim begins to behave very strangely whenever Juste encounters him.

Like Castlevania: Circle of the Moon before it, Harmony of Dissonance is a 2D Metroidvania in the vein of Castlevania: Symphony of the Night. However, Harmony of Dissonance also takes more direct inspiration from Symphony of the Night than its predecessor. Not only is Juste's White-Haired Pretty Boy design heavily reminiscent of Symphony protagonist Alucard, but Harmony also makes use of a dual castle setup like in Symphony. Though there is a twist — the two castles are used for Dual-World Gameplay, with Juste being able to warp between them and changes to one castle affecting the other.

Replacing the DDS cards of Circle of the Moon is a brand new magic system. The various sub-weapons can be combined with spell books at the cost of MP, with each combination providing a different effect. Many DDS cards were Random Drops while the spell books need to be found throughout the castles, removing much the RNG inherent to the old system.

Harmony of Dissonance provides examples of: