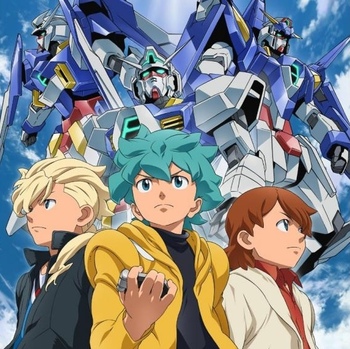 Three destinies will make history.
"It is the space age, hundreds of years after people began to emigrate to space colonies. The wars that were once fought for control of the Earth Sphere had ended, and it seemed that an era of peace had arrived. But this fleeting peace collapsed. A colony was destroyed by a mysterious enemy that suddenly appeared. The curtain was rising on a new battle that would continue over 100 years."
— Opening Narration
Advertisement:

Mobile Suit Gundam AGE is another part of the Gundam franchise, which began airing in October 2011 as part of Sunrise's Fall 2011 lineup. This one revolves around three generations of pilots, namely Flit Asuno, his son Asemu, and the latter's son, Kio. A manga, several models, a card game, and a video game are among the merchandise for this incarnation.

The sudden appearance of a hostile force known only as the UE (Unknown Enemy) prompted the Federation to hire Flit Asuno to build the ultimate weapon to beat back the UE: The Gundam AGE-1. As the Hundred Year War rages on between Earth and the UE, Flit, Asemu, and Kio must use the Gundam to defend the Earth.

The first generation begins with Flit, who was allowed to pilot the Gundam when its intended pilot was injured during a UE attack. The destruction of his second home colony lands him on the Diva, piloted by a rogue captain who is determined to battle the UE in defiance of the Federation's sluggish response to the threat. Flit uses the Gundam to protect colonies from the UE and in general to be a savior for humanity. It ends in tragedy and a dark revelation about the true nature of The Federation, and Flit embarks on a lifelong path of vengeance.

The second generation starts twenty-five years later and follows Flit's son, Asemu. He is given the Gundam as a sort of coming-of-age present by Flit on his seventeenth birthday, befriends Zeheart Galette in his last year of school, and is devastated when Zeheart turns out to be a Vagan agent. Although he is kind-hearted by nature, Asemu joins the military to follow and impress his father. Their relationship becomes increasingly strained as their viewpoints on war diverge and Asemu struggles with his continued friendly feelings towards Zeheart.

The third generation follows Kio, Asemu's son and Flit's grandson, who is only thirteen when he inherits the Gundam. The Vagan reveal their Earth-based sleeper agents on the anniversary of their first attack on the Federation and quickly turn Earth into a battlefield. Flit unveils the AGE-3 and puts Kio into it, having secretly trained him with flight simulators, and the Diva is brought out of mothballs to fight the new threat on Earth before returning to space.

A bit of trivia: Akihiro Hino, the writer of Gundam AGE, is actually the head of the video game company Level-5. Originally, Level-5 was hired by Sunrise to created a Gundam Licensed Game. Hino, who wanted to work with the franchise, wrote a plot summary for what would eventually be approved as this anime. The Level-5 game then became an adaptation of the anime and it was released August 30th in Japan (meaning that it was released before the anime finished). It is an Action RPG for the PSP that comes in two versions. Universe Accel features cameos and Mobile Suits from Universal Century Gundam series in its sidequests, and Cosmic Drive features cameos and Mobile Suits from Cosmic Era and Anno Domini Gundam series. The game follows the same plot as the anime, but also features more content for the series's history and world through optional quests using an original player avatar. It additionally features many more Wears for the AGE suits other than the ones that have appeared in the anime.

Also notable in AGE is the sheer volume of references and homages to other Gundam timelines, requiring the series to have a separate page for its Mythology Gags. If you are going to add an Expy or Shout-Out of a mobile suit or character that looks like the RX-78-2 or a Char, check there first. It's almost certain to have been added already.

Mobile Suit Gundam AGE comes with the tropes of: