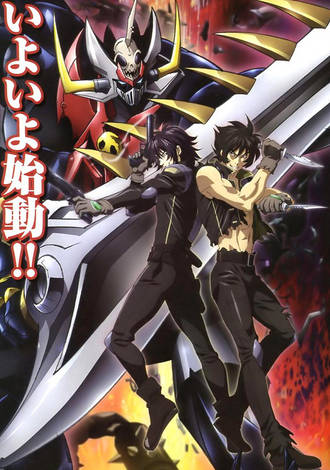 Mazinkaiser SKL is a 3-episode OVA series based on Go Nagai's Mazinger Z mythos, released over a period between January 28th and March 25th of 2011. It's directed by Jun Kawagoe, director of New Getter Robo and Super Robot Wars: Original Generation - The Animation (OVA).

There were no winners in the war between Dr. Hell and the Photon Power Institute. In the aftermath, technologies from both sides were scavenged, and since spread all over the world. When criminals and terrorists arise in robots and Mechanical Monsters, they are put down by Skull Force — a special team of Super Robot pilots. Among them are Ken "Amon-6" Kaido and Ryo "Lucifer-4" Magami, pilots of the Mazinkaiser SKL.

Kikajiima Islad has become surrounded by a Gravity Curtain as three armies, led by Garan, Kiba and Aira, fight to seize control over it. When the WSO finds out that in next sixty-six hours the Gravity Curtain is going to overload and blow up the entire planet, they send the Skull Force to capture the three devices maintaining it, each being used by the armies to build their robot forces.

But Kaido and Magami are quickly swept up in the war, and seem to be more interested in the slaughter than actually fixing the problem.

A novelization of it has been already released, along with a Manga adaptation.

Despite the name, it is not a sequel to Mazinkaiser, the earlier OVA series also based on Mazinger Z.