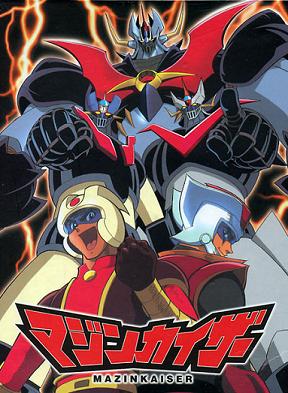 Mazinkaiser is a seven-episode Super Robot OAV re-imagining of the Mazinger Z story released in 2001. It tells the story of how Kouji Kabuto discovers and masters his grandfather Juzo Kabuto's final legacy, the most powerful of the Mazingers.
Advertisement:

Mazinkaiser originally appeared in Super Robot Wars F Final, when developer Banpresto asked Mazinger creator Go Nagai to design a new mecha for Kouji to use as a Mid-Season Upgrade. The idea was for Mazinger Z to be upgraded through exposure to Getter Rays into a new monstrous form, later redubbing it the Mazinkaiser. Super Robot Wars Alpha, the next "major" installment of the franchise, revamped the origin of the robot into being the original Mazinger Super Prototype that ended up being too difficult to control, necessitating its sealing away until Kouji finds and tames it (this version also conveniently fills out the long-standing plot gap of "what was the accident that nearly killed Kenzo and his wife?" in Mazinger mythology). The idea was such a hit with fans that Nagai quickly incorporated it into canon in anime and manga form, using the Alpha version as its origin story.

During a massive attack by Mechanical Beasts created by Mad Scientist Dr. Hell, the Mazinger Z and Great Mazinger sortie to battle, but are overrun through sheer numbers. Kouji's Hover Pilder is ripped from the Mazinger Z and hurled from the battlefield, and the machine is captured by Dr. Hell, who turns it into a mechanical devil for his own purposes and sends it against the Photonic Research Institute. Outnumbered, Tetsuya Tsurugi heads to battle with a damaged Great Mazinger when a new, insanely powerful and more demonic looking Mazinger suddenly appears with Kouji at the helm.

The seven-episode OAV was followed up by the movie Mazinkaiser vs. The Great General of Darkness, a remake of the 1974 film Mazinger Z vs. The Great General of Darkness, where the Mycenae Empire invades while Kouji is vacationing in Paris, forcing him to fight his way back to Japan and take the Mazinkaiser into battle once more. Said movie does not share the continuity with the OVA, with it not even using the same version of the Mazinkaiser mecha, though Super Robot Wars installments since Super Robot Wars Judgment have used them together.