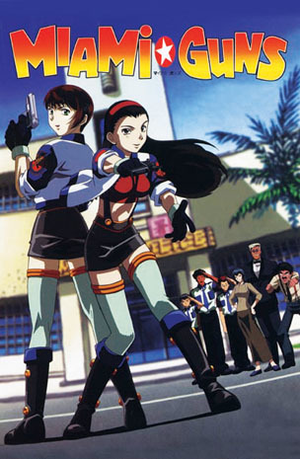 Miami Guns is a parody Cop Show about... well, we're not sure, actually. All we can say for sure is that it's a manga by Takeaki Momose (who would later create Magikano) which was serialized in Magazine Special from 1997 to 1999, and can be considered an Affectionate Parody of cop shows and Girls with Guns series. It was later adapted into a 13-episode anime by Group TAC and Animal Ya, which aired in 2000.

The story focuses on Sakurakoji Yao and Amano Lu, two cops from a relatively fictional version of Miami City, and the Ragtag Bunch of Misfits they belong to that is the Miami Police Force. Other than that... the show's pretty random with its gags, though manages to stay funny enough to sit through.