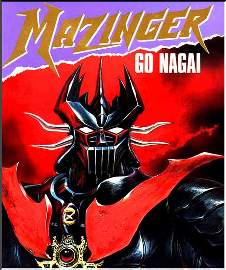 New Mazinger -also named Mazinger U. S. A. / U. S. version or Mazinwarrior- was an one-shot story written and drawn by Go Nagai and published by First Publishing Chicago in 1988. It was intended to be a new, ongoing Mazinger Z series expressly made to introduce the franchise to the American market. Unfortunately, the concept did not take off and it only became a short, alternate story.

In the year 220X, one hundred fifty years of wars between two superpowers have rendered Earth into a polluted, scorched, inhabitable hell. Due to the hostile, poisoned enviroment, soldiers need to wear giant power armors to combat.

The main character is Major Kabuto (no first name was given, but we can hazard a guess), a soldier fighting in one of the armies using his power armor named Mazinger. During a skirmish, an explosion tears a dimensional gap, and Kabuto is thrown through it. He appears on an uknown place, in time to see several four-armed, reptilian beings assailing a beautiful, human woman.

And all of them are just so big like his combat armor. Even their mounts are giant.

Quickly and efficiently Kabuto dispatches both attackers and escorts the woman back to her palace. There he learns that dimension inhabited by giants is called Brobdingnag. Two countries are in war: the Kingdom of Lithgor -inhabited by humanoid beings- and the Zard Empire, ruled by a desert warrior race of four-armed, reptilian humanoids. The Zard Empire has conquered the entire continent and they were already invading Lithgor. The High King of Lithgor tried to seek a truce with them, but he got murdered during an ambush. His daughter Krishna was trying to escape from the Zard warriors when they caught her and Kabuto appeared.

Kabuto agrees helping to defend her kingdom... if it will earn him her love.